On a limited planet, the Imperial Mode of Living cannot continue forever. 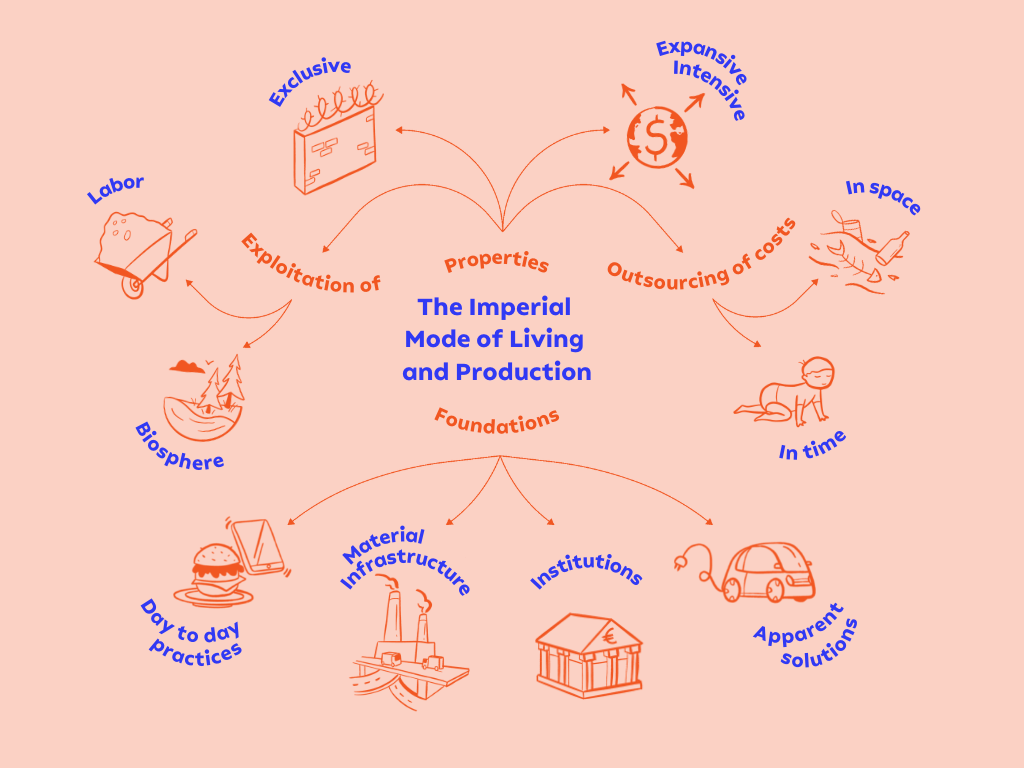 The mode of living and production of most people in the Global North is imperial, because it can only exist through systematically accessing the cheapest labour and the cheapest resources elsewhere. It is exclusive and not infinitely generalizable – for it always requires places and people, to whom the costs are outsourced. As it spreads further and intensifies, it increasingly pushes boundaries, leading to the earth heating up, scarcity of resources, conflicts and wars. Nevertheless, it is difficult to change this way of life – it is stable because it is firmly anchored in our everyday life. It is hardly possible to live as an individual at the expense of others, also because the infrastructures (such as motorways or coal-fired power stations) and institutions (such as banks, schools, ministries) that surround us, promote this way of living and managing. It is also stable because fake solutions (such as the hope of technological innovations or simplistic political solutions) prevent the underlying causes of the problems from being tackled.

The paradox of the Imperial Mode of Living is that most people in the Global North are the exploiters and the exploited at the same time. We are living at the expense of each other. Criteria such as country of origin, skin color, gender, and other non-influencing categories, due to existing forms of discrimination such as racism and sexism, additionally determine whose backs carry how much burden. These differences exist within societies, but especially on a global scale between the rich countries of the Global North and the Global South. Also in the Global South, with increasing industrialisation, there are narratives generated that are supporting the Imperial Mode of Living. Car, home, meat and air travel – while the Imperial Mode of Living is normal for some, it seems to be a broken promise of the future for others to be functional.

It is not possible to generalize this mode of living. It is called imperial because it presupposes an ‘outside’, an area that can still be exploited; where labour and natural resources are cheaply available. An area where th earising problems and the rubbish of our way of life and production can be unloaded. Due to  the capitalistic dynamics of the North and the new middle classes of the Global South, this external area is shrinking with enormous speed.

I.L.A. Kollektiv (Hg.) (2019): “At the expense of others. How the imperial mode of living prevents a good life for all.” München: oekom. Illustration: Sarah Heuzeroth.

At the expense of others?

In the workshop “At the expense of others?” we shed light on the modern, often invisible structures of exploitation that constitute an essential part of Middle European prosperity and well-being. To do so, we work with the concept of the Imperial Mode of Living which provides an explanatory approach to the contradictory observation: although there is increasing knowledge of the climate crisis and social inequality, both are coming to a head. How is this possible, and why does change take so long?

We live in a world full of contradictions: exploitation and solidarity often exist next to each other. Our daily life takes place in a system that drives and stabilizes inequalities and makes it almost impossible for the individual not to live at the expense of other people and the environment. Much of this we have learned to accept as normal, thus preventing the establishment of a good life for all. At the same time, there are diverse realities of a just and solidary mode of living in the here and now. All these ambivalent processes are reflected in the physical space that surrounds us.